Tanks labeling: the good and the bad!

I will always remember the remark of one of my mentors and Trimix Instructor when I was labeling my mixed gas diving double tanks before we jump on the water. I had just analyzed my Trimix mixes and was marking my tanks 14/50 (IANTD tables 1998)
"George! What are these numbers on your tank?  Mixed gas diving is a serious activity! and tanks should be labeled properly. You should mark Tx14/50 so we know you are diving TRIMIX".

He was right! I understood and acknowledged his comment, it was an important marking for somebody coming from a renowned and noble professional commercial scuba diving agency. Commercial and military divers have set the standards for us, it is important to keep Technical diving and Technical cave diving a "noble" activity where little details count.

He had set up a good example and I keep following that example myself and with my students. I know sometimes I have a tendency to rush after analyzing my Nitrox tanks, and mark the number 32 on them.  However, I still have my mentor's voice in my head telling me that I am not doing the best at labeling my tanks. So I correct myself, and mark my tanks with either Nx32 or Eanx 32 instead of the 32 plain bare number, plus MOD and IANTD stickers. http://youtu.be/_cKGsVacAjY
Good example stands so why not forget the bad ones.


From the IANTD Essential Manual
SAFETY NOTE:
"Some incidents, accidents and fatalities happen because of a number of inappropriate actions and reactions. One important aspect is tank miss-labeling (as you have learned in your Nitrox class) but few people are following the basics. Remember a piece of tape can be removed, and in a stressed situation, handwritten numbers can be interpreted differently and fatal mistakes have happened. So this is a reminder of the Mixed Diving Rules set up in the 1990s by IAND, Inc. DBA IANTD and ANDI, and later on by the European diving agencies like CMAS, that also follow pretty much the same basics". (Photos Georges Gawinowski) 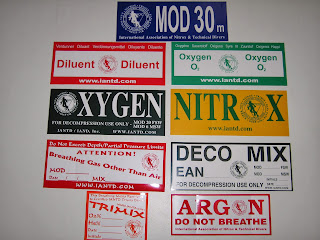